How to Set Up Squid Proxy for Private Connections on Ubuntu 20.04

Proxy servers are a type of server application that functions as a gateway between an end user and an internet resource. Through a proxy server, an end user is able to control and monitor their web traffic for a wide variety of purposes, including privacy, security, and caching. For example, you can use a proxy server to make web requests from a different IP address than your own. You can also use a proxy server to research how the web is served differently from one jurisdiction to the next, or avoid some methods of surveillance or web traffic throttling.

Squid is a stable, popular, open-source HTTP proxy. In this tutorial, you will be installing and configuring Squid to provide an HTTP proxy on a Ubuntu 20.04 server.

To complete this guide, you will need:

You will use the domain name your_domain in this tutorial, but you should substitute this with your own domain name, or IP address.

Squid has many use cases beyond routing an individual user’s outbound traffic. In the context of large-scale server deployments, it can be used as a distributed caching mechanism, a load balancer, or another component of a routing stack. However, some methods of horizontally scaling server traffic that would typically have involved a proxy server have been surpassed in popularity by containerization frameworks such as Kubernetes, which distribute more components of an application. At the same time, using proxy servers to redirect web requests as an individual user has become increasingly popular for protecting your privacy. This is helpful to keep in mind when working with open-source proxy servers which may appear to have many dozens of features in a lower-priority maintenance mode. The use cases for a proxy have changed over time, but the fundamental technology has not.

Begin by running the following commands as a non-root user to update your package listings and install Squid Proxy:

Squid will automatically set up a background service and start after being installed. You can check that the service is running properly:

By default, Squid does not allow any clients to connect to it from outside of this server. In order to enable that, you’ll need to make some changes to its configuration file, which is stored in /etc/squid/squid.conf. Open it in nano or your favorite text editor:

Be advised that Squid’s default configuration file is very, very long, and contains a massive number of options that have been temporarily disabled by putting a # at the start of the line they’re on, also called being commented out. You will most likely want to search through the file to find the lines you want to edit. In nano, this is done by pressing Ctrl+W, entering your search term, pressing Enter, and then repeatedly pressing Alt+W to find the next instance of that term if needed.

Begin by navigating to the line containing the phrase http_access deny all. You should see a block of text explaining Squid’s default access rules:

From this, you can see the current behavior – localhost is allowed; other connections are not. Note that these rules are parsed sequentially, so it’s a good idea to keep the deny all rule at the bottom of this configuration block. You could change that rule to allow all, enabling anyone to connect to your proxy server, but you probably don’t want to do that. Instead, you can add a line above http_access allow localhost that includes your own IP address, like so: 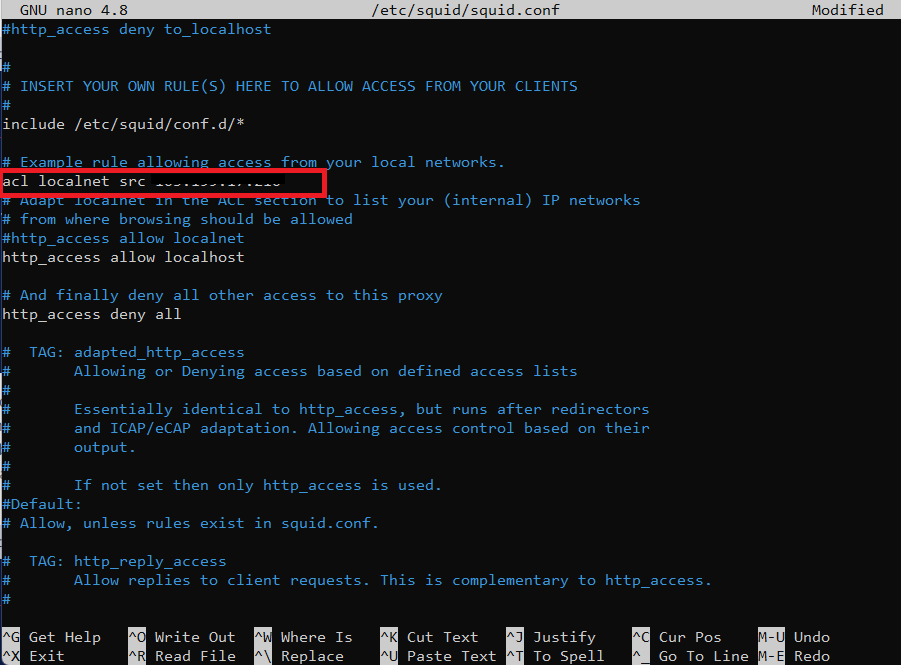 After making that change, save and close the file. If you are using nano, press Ctrl+X, and then when prompted, Y and then Enter.

At this point, you could restart Squid and connect to it, but there’s more you can do in order to secure it first.

Most proxies, and most client-side apps that connect to proxies (e.g., web browsers) support multiple methods of authentication. These can include shared keys, or separate authentication servers, but most commonly entail regular username-password pairs. Squid allows you to create username-password pairs using built-in Linux functionality, as an additional or an alternative step to restricting access to your proxy by IP address. To do that, you’ll create a file called /etc/squid/passwords and point Squid’s configuration to it.

First, you’ll need to install some utilities from the Apache project in order to have access to a password generator that Squid likes.

This package provides the htpasswd command, which you can use in order to generate a password for a new Squid user. Squid’s usernames won’t overlap with system usernames in any way, so you can use the same name you’ve logged in with if you want. You’ll be prompted to add a password as well:

This will store your username along with a hash of your new password in /etc/squid/passwords, which will be used as an authentication source by Squid. You can cat the file afterward to see what that looks like:
Output

After verifying that your username and password have been stored, you can update Squid’s configuration to use your new /etc/squid/passwords file. Using nano or your favorite text editor, reopen the Squid configuration file and add the following highlighted lines: 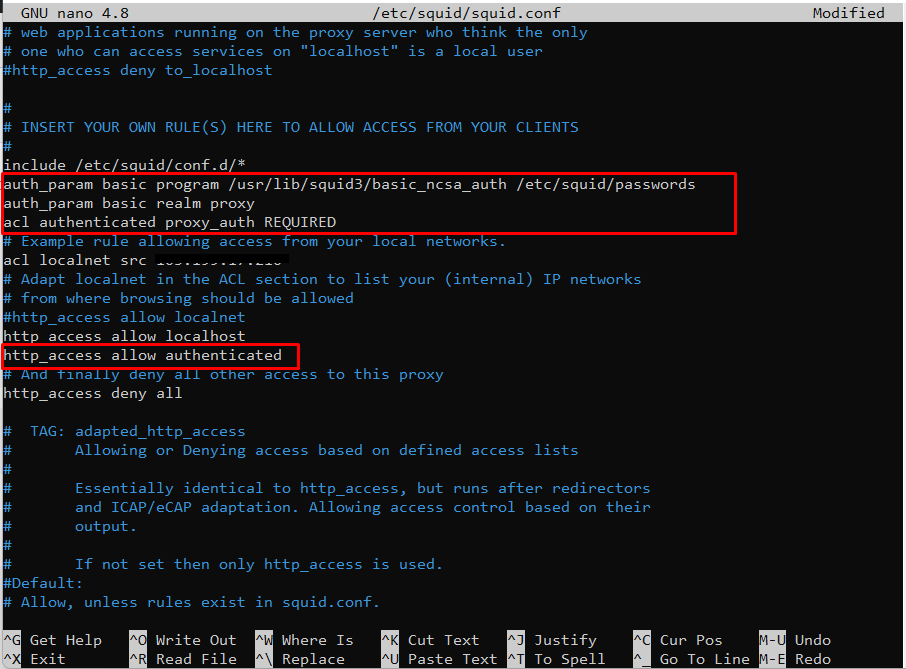 These additional directives tell Squid to check in your new passwords file for password hashes that can be parsed using the basic_ncsa_auth mechanism, and to require authentication for access to your proxy. You can review Squid’s documentation for more information on this or other authentication methods. After that, you can finally restart Squid with your configuration changes. This might take a moment to complete.

And don’t forget to open port 3128 in your firewall if you’re using ufw:
In the next step, you’ll connect to your proxy at last.

In order to demonstrate your Squid server, you’ll use a command line program called curl, which is popular for making different types of web requests. In general, if you want to verify whether a given connection should be working in a browser under ideal circumstances, you should always test first with curl. You’ll be using curl on your local machine in order to do this – it’s installed by default on all modern Windows, Mac, and Linux environments, so you can open any local shell to run this command:

The -x argument passes a proxy server to curl, and in this case you’re using the http:// protocol, specifying your username and password to this server, and then connecting to a known-working website like google.com. If the command was successful, you should see the following output:

You can configure the proxy on the browser according to the instructions:

You can check IP for working proxy authentication at: https://whoer.net/fr

In this tutorial, you learned to deploy a popular, open-source API endpoint for proxying traffic with little to no overhead. Many applications have built-in proxy support (often at the OS level) going back decades, making this proxy stack highly reusable.