Managing Hyper-V environments can be a challenging task. Thus, you need a powerful management tool which allows you to configure and control your virtual infrastructure from a central console. Even though you can use advanced GUI tools (Hyper-V Manager, Server Manager, or System Center Virtual Machine Manager), you still won’t be able to fully enjoy the Hyper-V experience and explore the hypervisor’s functionality without using PowerShell. Unlike the aforementioned tools, PowerShell allows you to automate all core tasks, thus providing you with more flexibility and efficiency.

Moreover, read this blog post to find out how NAKIVO Backup & Replication can help you protect your Hyper-V environment and at the same time save your time, money, and effort.

PowerShell is a task automation and configuration management framework developed by Microsoft, which includes a command-line shell and associated scripting language built on the .NET Framework and .NET Core. This tool was specifically designed for system administrators and it includes an interactive prompt and a scripting environment that can be used independently or in combination.

However, PowerShell is an open-source tool, meaning that new cmdlets can be added by any third-party developer. Thus, anyone can contribute to the Microsoft’s PowerShell code base by sharing their own PowerShell commands on GitHub.

What Can PowerShell Do?

New and inexperienced Hyper-V users generally prefer to run GUI tools because it is much easier to find required features and settings as well as notice any issues using a graphical interface. However, GUI tools do not enable automation, meaning that to apply changes to all VMs you would have to configure each Hyper-V VM separately. For example, after creating a new VM, you would have to manually update some of its default settings.

Moreover, you can save required Hyper-V PowerShell commands into a text file (which has the .ps1 extension) and then run this script to perform certain tasks. What’s more, you can schedule a PowerShell script to be launched at a particular time using the Task Scheduler.

How to Open PowerShell 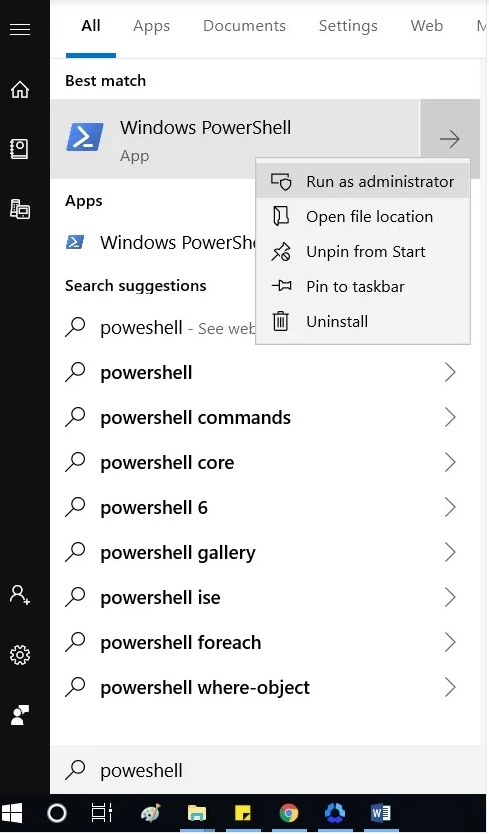 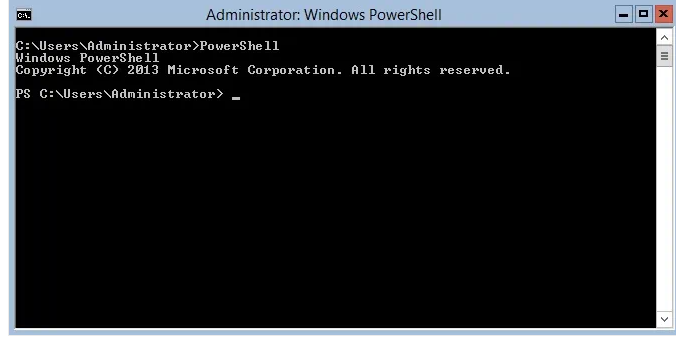 Let’s now learn about the different possibilities that Hyper-V PowerShell commands can open for your virtual infrastructure.

This Hyper-V PowerShell command is especially helpful for users who are new to PowerShell and are not aware of which cmdlets should be used and how. By running the Get-Command cmdlet, you can see the full list of all available cmdlets, functions, and aliases installed on the computer. 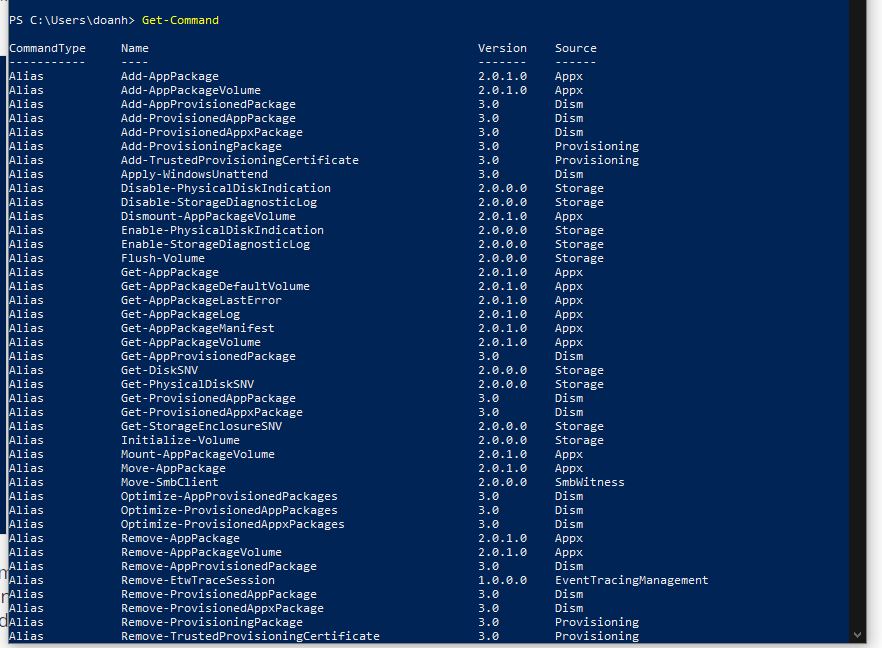 However, if you wish to narrow down your search and get the list of Hyper-V PowerShell commands that match specific criteria, you can use the Get-Command *-VM cmdlet to find a list of commands that allow you to control and configure VMs. By changing the VM parameter to VHD, you can get the full list of cmdlets used for managing virtual hard disks. Thus, you can try out various search parameters to get the results you need. 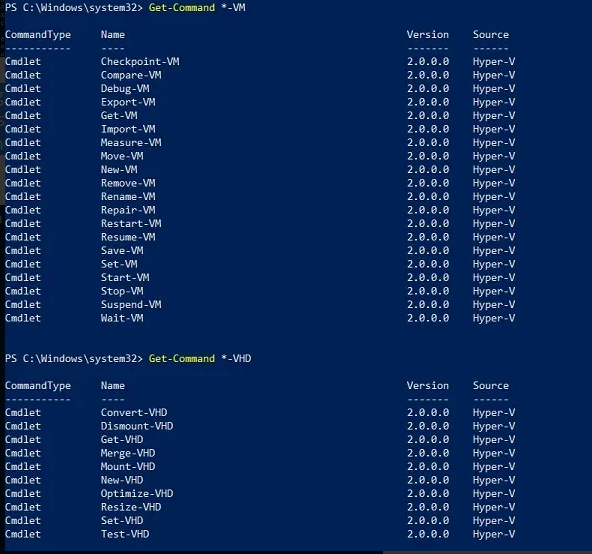 The following Hyper-V PowerShell command allows you to see all of the VMs available on one or more Hyper-V hosts. To see all VMs on the local Hyper-V host, you should run the Get-VM cmdlet.

On the PowerShell screen, you can see the list of available VMs, including their name, state, CPU usage, memory assigned, uptime, status, and version.

This particular cmdlet helps you start a VM of your choice. For this purpose, run the following Hyper-V PowerShell command:

As a result, the VM named Windows Server 2016 should be started on your local Hyper-V host. Let’s check to see if the VM has actually started by running the Get-VM cmdlet.

Moreover, you can use a modified version of the Start-VM cmdlet, which allows you to launch the VMs only if their names start with Hyper-V:

As you can see, the VM named Hyper-V Server Desktop has successfully started. However, another VM (Hyper-V Server 2012) has already been in a running state and PowerShell notifies you of this fact.

The Stop-VM cmdlet allows you to shut down or turn off a selected VM. For this purpose, you can run the following cmdlet:

As you can see, the selected VM has been successfully shut down through the guest OS.

Another example is that you can turn off the VMs whose names start with Hyper-V:

Note that forced shutdown is similar to pulling the power on a physical machine, meaning that it can result in a loss of unsaved application data. In this case, it is recommended that you save the VM in order to avoid potential data loss. For this purpose, you need to run the Save-VM cmdlet, which is equivalent to hibernating a physical computer:

If you choose to save the VMs whose names start with Hyper-V, run the following Hyper-V PowerShell command:

To verify that the VM has been successfully created, use the following Hyper-V PowerShell command:

On the other hand, if you want to delete certain Hyper-V snapshots, you can use the Remove-VMSnapshot cmdlet. For example, if I want to delete all VM snapshots whose names start with Testing, I should run the following cmdlet:

The screenshot above demonstrates the entire process of deleting the selected Hyper-V snapshots.

This Hyper-V PowerShell command is intended for verifying that the virtual hard disk file actually exists and can be used for Hyper-V deployment. This cmdlet goes as follows:

In the case that the VHD path is valid, you would see the following output on your screen.

To learn more about managing virtual hard disks using PowerShell cmdlets, we recommend that you read our blog post which delves into essential basics of working with Hyper-V VHD and VHDX files.

This Hyper-V PowerShell command allows you to gather resource utilization data for a specific VM. For example, run the following cmdlet to learn about CPU usage, RAM usage, disk capacity, and network traffic for the VM named Windows Server 2016:

Note that the Measure-VM cmdlet can report required data only after resource metering has been enabled on a selected VM. To enable resource metering, use the following Hyper-V PowerShell command:

If everything is correct, you should see the following information on your PowerShell screen:

PowerShell has a cmdlet which allows you to update the version of the selected VM:

After running the Hyper-V PowerShell command, the VM named TestVM can be updated to the current VM version.

This Hyper-V PowerShell command can help you see all the current processes on your local computer. After running the Get-Process cmdlet, you can get the following information on your screen: 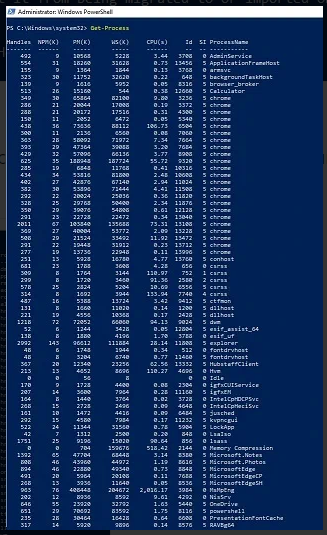 To narrow down the search and find a specific process, you should type the process name or ID. For example, if you want to learn how Microsoft Word is currently working, you should look through the list of all the running processes and find the line with the information about Microsoft Word (i.e. WinWord), including its process ID. Using the process ID, you can run the following cmdlet to get the necessary data:

Furthermore, the data about the current WinWord processes can be presented in another format, i.e. as a list of properties. Run this cmdlet to get a more detailed output: 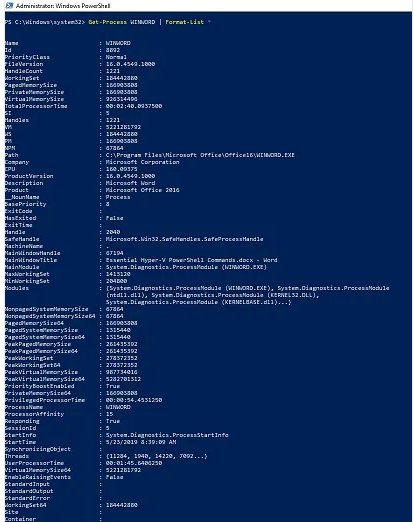 After getting hold of the process data, you can run the following cmdlets:

Another example is when you have opened PowerShell in “normal” mode, but you need to run PowerShell in elevated mode to get access to administrative rights. In such case, run the following Hyper-V PowerShell command:

On the other hand, if one of the running processes stops responding, you can run the Stop-Process cmdlet to halt the failed application:

Stop-Process -Name “notepad”
In this case, all instances of the Notepad application on the local computer are stopped.

For example, you can stop the specific Notepad process by identifying its process ID and running the following Hyper-V PowerShell command:

As a result, only the selected Notepad process should be stopped.

This Hyper-V PowerShell command allows you to filter pipeline objects and find the exact data that you need. In this case, you need to create a PowerShell script in which you specify which objects can be passed along the pipeline. Using various search criteria, you can find any object on the local computer.

For example, if you would like to locate the processes which have stopped running, use this cmdlet:

Another example of using the Where-Object cmdlet is when you want to find a specific cmdlet. The following Hyper-V PowerShell command can help you find all cmdlets which start with Wait:

The next Where-Object cmdlet can help you find a particular process based only on its name. By running the following command, you can get a list of all the processes whose names start with sys:

As you can see, the number of tasks which can be performed using these cmdlets is impressive and you should definitely pay more attention to Hyper-V PowerShell commands. PowerShell cmdlets allow you to perform various tasks with multiple VMs at the same time and explore the Hyper-V functionality to the fullest. Even though PowerShell might seem intimidating at first, once you learn how to work with it, you can quickly discover how to use Hyper-V PowerShell commands to your advantage.