How to configure the network on Linux

If you are a regular Linux user or a system administrator, you may require network setup on your system. Unlike desktop systems where you can use dynamic configurations, you will have to perform specific configurations on the servers depending on your network environment.

We have used Ubuntu 20 operating system to describe the process mentioned in this article.

To view the current network configurations, run the following command in Terminal. It will display the output for each network interface in a separate section.

You can also run the ifconfig command to see the IP address.

In this method, we will see how to configure the network settings. However, remember, these settings are not permanent. After you reboot your system, the settings will be deleted.

3.1. Assign an IP address to the network interface.

We will use ifconfig to assign an IP address to our network interface. Here is the command syntax:

Once done, you can test your configuration by running the ifconfig command as follows:

The default gateway is the address used to communicate with the external network. To configure the default Gateway, use the following command syntax:

DNS servers resolve domain names to IP addresses so that browsers can load Internet resources. To configure the DNS nameserver address, use the following command syntax:

In the following example, I will set the Google DNS IP address as my name server address to 8.8.8.8.

3.4. Remove the IP address from the network interface

To remove the IP address from the network interface, run the following command in Terminal:

In this method, we will configure permanent network settings that your system will remember even after reboot. For that, we will have to edit the file /etc/network/interface with any text editor.
Run the following command in the terminal to do so:

Then add the following lines to it:

Now press Ctrl + O and then Ctrl + X to save and exit the file.

Please note that the address, network mask, and Gateway line must begin with a leading space

To add DNS server information, we will need to edit the file /etc/resolv.conf
Run the following command to do so:

I will add here two DNS Servers. One is Google’s DNS server address and the other is my router’s IP address. 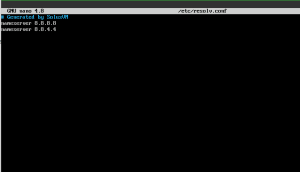 Now press Ctrl + O and then Ctrl + X to save and exit the file.

Just like an IP address, a unique hostname is also used to identify a system on the network. To find your system’s current hostname, run the command below in Terminal:

To change the system hostname, you can run the command below. But when you reboot your system, your original hostname will be restored.

Here I am changing my hostname from Ubuntu to Ubuntu20

To permanently change the hostname, you will need to edit the hostname file located at /etc/hostname
Enter the command below to do so:

This file contains only the hostname, change the old name to the name you want, then press Ctrl + O and Ctrl + X to save and exit.